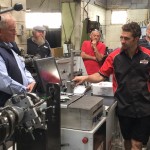 Organised by the T.S.O.A. WA with an open invitation to the members of the Triumph Car Club, MX5 club, Pre-War Sports Car Club, Veteran Car Club,

With morning tea at the ready and the kettle on the boil tea or coffee in hand it was soon time to let David Galloway introduce himself his Father Laurie (Founder of Galloway Engines in 1978) and the team at Galloway’s. For close to 3 hours David took over 40 (i think close to 50) motoring enthusiasts for a tour of his workshop. David took the time to explain every step of the engine reconditioning process from Line Boring to Block Boring, Balancing, Crank Grinding and Cylinder reconditioning.

David also took the time not only to explain how his machines work but the importance that component plays in the reliability and performance of our beloved machines.  David managed to capture the attention of all the members throughout the tour from the Driver and passenger, the novice mechanics right through to seasoned motor restorers,   It was very apparent by lunch time the members could see David not only has the  knowledge and skill but has the passion for  engineering and service to the Vintage, Classic and performance enthusiast.

On behalf of those that attended the tour I would like to express our thanks to David and the Team at Galloway Engines for a truly fantastic educational tour.